In this series of articles, I will give you, dear friends and readers, a simplified idea of the main styles and movements of painting.

It may designate all artistic techniques that use spots. In fact, these techniques fall into two categories, corresponding to the two main meanings of the word spot:

1) stain means almost touch: the color deposited by a stroke of brush and forming a separate unit instead of melting into a continuous paste. Tachiste applied himself to the technique of the Impressionist and Neo-Impressionist painters, and especially to that which took their name from the Italian macchiaioli, so called after a painting by G. Fattori « Rotonda dei Bagni Palmieri » Florence in 1867 under the title Macchiaiole (small spots).

It is a painting that translates the vibrations of light in pure tones exalting one another. This value of tachism, which is found in the literature of the late nineteenth century, is now aged. It tends to be replaced by the more general and more popular term Impressionism.
2) more recently, tachism was used in France, around 1952, on the initiative of the critic Michel Tapié, to designate an aspect of non-figurative art (« lyrical abstraction », « abstract expressionism » Important role is played by the stain, this time being heard in the direction of splashing, the model no longer being the touch of paint, whose painter controls the form by depositing it on the support, but the spot that a drop of d Ink by crashing onto paper. The values ​​highlighted in this case are the chance and the energy invested in the gestures of the artist manipulating the painting (hence the frequent name: gestural tachism). Such an art is distinguished from figurative expressionism in that in it is expressed the emotion of the artist by the subject at first, whereas tachism pretends to do it by pictorial matter alone. But he was also opposed to the European abstract painting of the 1950s, which, while repudiating figurative content, remained faithful in general to classical values ​​of composition.

By the role it assigns to existential values, tachism is characteristic of a certain French intellectual milieu of the time, that dominated by existentialist philosophy. But it also closely resembles American action painting, and their relations deserve to be specified. The principal tachists of the school of Paris are Fautrier, Wols, Mathieu and Bryen, to which must be added the Canadian Riopelle.

Here is a creation of my artistic work, with the technique of tachism: 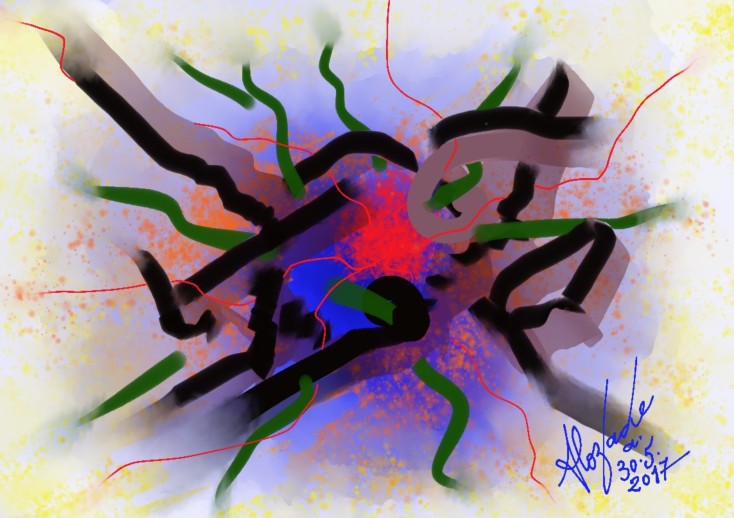