During my trip to Reims (France) (May 26, 2018), I took pictures especially for my friends from my blog.
I hope you will love them

The Notre-Dame de Reims Cathedral.
Its construction began at the beginning of the thirteenth century, it was completed in the fourteenth century. Above all, it was a very significant destruction during the First World War. It is one of the major achievements of Gothic art in France, both for its architecture and for its statuary which includes 2,303 statues.      [Wikipedia]

Reims, (Population 179,992 -2010-). 12th city of France, city of coronations in the heart of Champagne, is characterized by a prestigious historical heritage inscribed on the list of UNESCO. It is also distinguished by the dynamism of its local life in a pleasant and attractive living environment for both tourists and businesses.                       [translated from: reims.f]

Thanks to donations of 200,000 gold francs from the Reims Auguste Subé died in 1899. After a call for projects, in 1903, the sculptors Paul Gasq, Paul Auban and Louis Baralis, the ornamentalist Joseph Wary and the architect André Najoux make it in surmounting it with a Bronze Renown and dedicating it to the four rivers that cross the Marne department. The first stone was laid on May 23, 1905, it was inaugurated on July 15, 1906.               [Wikipedia] 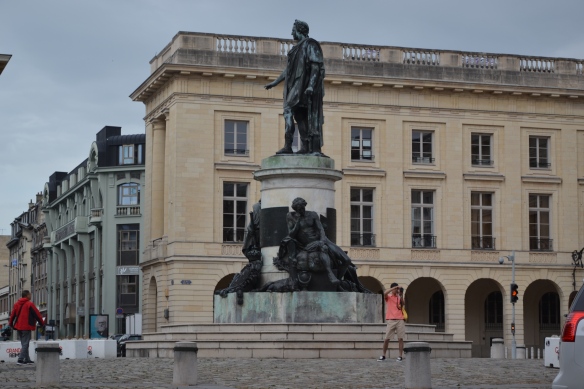 Begun in 1757, was built in honor of Louis XV. It is typical of 18th century architecture: arcades and balustered roofs with horizontal lines. The pediment of the former Hôtel des Fermes – the current sub-prefecture – refers to the commercial activities of Reims.

The author of all photos: ALOZADE Ahmed

Forbidden to download or use the photos of this article without the written permission of the author.